One of my favorite authors, Kassanna Dwight is working on a beautiful angel and demons series. Her first book Angel Mine will be out in a few weeks and I can't wait. I've been intrigued with this story since she hired me to design her cover. I'm even more intrigued after reading the excerpt. I want to learn more: 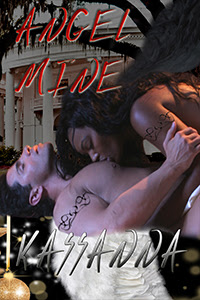 In an act of unselfishness, Julia suffered atrocities only man could inflict on their fellow man. Death was her punishment for a love freely given. Reborn as angel, she now collects the souls of the dying to escort them to heaven. But the pain of her untimely death lingers and on its anniversary she revisits her home, only to relive her shame. Uriel saw her over a century ago as she was escorted through the gates of heaven by his brethren Metatron himself. After a while the pull he felt toward her could no longer be denied but even angels have rules and he follows them. Watching, making sure she was safe until his request is approved.On Christmas Eve he receives word. After a hundred years of silence he could follow through with his plans to make Julia “Angel Mine”
Kassanna is also participating in The Next Big Thing blog hop. Go check her out.


R.W. Shannon is a native of the East Coast but spend six years in the desert before returning. She became a librarian so that she can walk around with her nose in a book without ridicule and also for the free books. When she’s not bellydancing or getting another tattoo, she can be found in the kitchen of her mother’s house until she gets her own.

A member of Romance Writers’ Association and Passionate Ink, she is always at work on another project. In addition to Phaze book, her books can be found at Cobblestone Press and Beautiful Trouble Publishing.
Please check out her website rwshannonbooks.blogspot.com for more information or email her at authorrwshannon@gmail.com


Who could have tripped the silent alarm? The question haunted him. He had double-checked both the alarm and door before leaving.


Reaching the shop, Chase inspected the front entrance and plate-glass window, but saw no obvious damage. He unlocked the door and pushed it open. A red light flashed on the security panel, indicating the back door was open. In case the burglar was still here, he grabbed a replica of Thor’s hammer. He turned off the alarm and tiptoed toward the back. Chase stopped short.


There was a gaping hole in the center of the room that housed Dawn. Chase raced over and peeked inside. She was gone. The hairs of his neck stood on edge. Reaching around the splintered wood, he turned on the light. The room was empty. Of course, she would blow a hole in the wall. It was a pocket door that opened with a hidden panel. But to see it in person… Man alive!


Panicking, he backed away, knocking over a box. What? How?


Chase’s heart pounded as he crept toward the back. At first, there was resistance on the knob; then it creaked opened. Dawn stood on the other side. Wind whipped her hair around her shoulders. Her breasts heaved beneath her leather jumpsuit. His gaze wandered to her erect nipples but he looked away. The toy hammer slipped from his hand. A while back, he and his buddies in the Dawn of the Day chat room had fantasized about what they’d do upon meeting Dawn in person. Chase had bragged he’d be cool as an ice cube, but he had lied. He was about to explode.


Suddenly, Chase was on fire. A current of electricity exited Dawn’s hands and entered him. Clutching his chest, Chase fell to his knees. Dawn vaulted over him toward the entrance. On reflex, he grabbed her ankle. She didn’t fall or stumble. Instead, she pivoted in midair and kicked him in his face. With a grunt, he released her and fell onto his back. Dawn’s boots clicked against the pavement as she rushed through the opening.


Chase climbed to his feet and stumbled through the back door. He had to stop her. “Dawn. I don’t want to—”


A sucker punch knocked him on his back. He blacked out. When he came to, Dawn hovered over him like an angel. Chase gazed at her high cheekbones and full lips. Even in the darkness, he could make out her blue eyes. His heart fluttered. For years, he had fantasized about waking up to her face. He started to get up but was stopped by her foot on his chest. Gingerly, he lay back against the carpet.


“Identify yourself, villain,” she commanded.


“I’m not a villain. My name is Chase. Chase Donovan.”


“Chase? That’s an ordinary name for a villain.”


Bending, she dug her heel into his chest. He flinched. Chase tried to disarm her with a smile, but judging by her stern look, she was unimpressed.


“What is your motive?” she asked.


Tilting her head, she studied him. What did she see? He hoped she would understand he wouldn’t hurt her. Dawn’s expression softened but she didn’t remove her foot from his chest.


“You say you have no motive,” she said. “Yet you are holding me captive.”


“Why was I being imprisoned in that tiny room?”


“Until a few moments ago, you were a statue.”


Chase nodded. He saw wheels turning in her head, but Dawn clearly didn’t trust him. He couldn’t breathe. Not just because she was standing on his chest, but because she was the most beautiful woman he’d ever laid eyes on. She took her foot from his chest, picked him up by the collar and set him on his feet. Damn. Chase was a soldier but this woman could snap him like a twig. And that turned him on. He straightened his clothing. When he looked at her, Dawn’s hands were balled into fists. Her hands shimmered in sparks of white and blue electricity. Chase gulped.


“Talk,” she commanded. “What’s this about me being a statue?”


“I made you. Well, I made a likeness of you to display in my store. I know I could’ve just bought you online, but I thought it would be fun and I’m trying to find a new hobby.”


She gazed at him from head to toe. “Store? This isn’t the library of your lair?”


“My guess is this.” Dawn motioned to the locket around her neck. “The turquoise is a magic stone from my homeland. It’s said if you wish upon it, and your intentions are pure, it will give you the desires of your heart.”


Chase nodded. At the moment, his thoughts weren’t pure. He had to fight himself not to gather her in his arms and make love to her. His heartbeat was slow and steady, but watching her breasts heave had blood rushing to his groin. Glancing away, he tried to think of something other than the woman of his dreams standing in front of him. His erection, however, wasn’t going away.

Posted by Unknown at 8:56 AM No comments:

The Next Big Thing Blog Hop

I was invited by the lovely ViviDumas to join this blog hop and have invited four more wonderful authors to participate. Please, stop by and enjoy the fun!

I'm giving you a quick peek at my upcoming release Diamond Mine. This is a futuristic story of love between a human slave and her alien master. 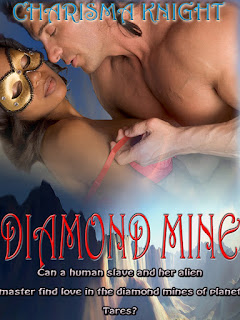 What is the working title of your book?

Where did the idea come from for the book?

From my muse...don't tell her but she's a slave driver!

What genre does your book fall under?

Which actors would you choose to portray your characters in a movie?

What is a one sentence synopsis of your book?

Can a human slave and her alien master find love on planet Tares?

Will your book be self published or represented by an agency/publisher?

I am self publishing Diamond Mine


How long did it take you to write the first draft of your manuscript?

What other books would you compare this story to within your genre?

Who or What inspired you to write this book?

Besides my muse, my significant other because he loves me unconditionally.

What else about your book might interest the reader?

I think readers will be interested in my heroine, Lithia. She's a slave who has been mistreated not only by the alien overseers, but by humans too, simply for befriending and falling in love with a young Taresnian warrior. She sought to change how the Taresnians mistreated slaves. When that didn't work, she adapted to her situation and never gave up hope while trying to protect her fellow humans even though they cared nothing for her.

Thanks so much for hanging out with me at my blog to learn more about Diamond Mine. Please visit the ladies below next Wednesday, 12/12/12 to check out their works in progress!

Bisi Leyton
Posted by Unknown at 3:04 AM 3 comments: