Okay, today was an awesome day as well. We didn't walk around much, just sat and watched the teams qualify for the actual race which starts some time Sunday, around noon.

Today, Ben Spies came in first, Jorge Lorenzo was second, and Nicky Hayden was third! I'm loving the Ducati team, but I must say, I have a great respect for all the drivers. Wow, they are awesome because they are doing something they totally love, making lots of money, earning much respect, and setting the standard for all other riders!

Didn't take any photos today, but will catch up tomorrow!

Howdy folks! I'm on vacation here in Indianapolis, and totally loving it!! The air is fresher, people are not in a hurry, and are very, very pleasant. Ah, just the change of scenery has pepped me up!

Got up this morning, ate breakfast, and hit the gym for an hour! I've been such a slug when it comes to that.  Loving the elliptical trainer and treadmill. I lifted some weights, and spent 3 1/2 hours at the track. So, I've had my exercise for the day.  Tomorrow, going back to the gym before going to the track. Seriously, used to work out seven days a week, and started slacking off for the past two years. Need to make that change.

Thinking I need to cut down on my internet time, too. Sad but true, but I'm an internet addict! I haven't been in front of the computer since yesterday morning. Okay, still utilizing the CrackBerry, even while at the track. LOL That's okay though, I'll never separate from the CrackBerry!! NEVER!!!!

We left Maryland Yesterday at 2 p.m, and arrived to Indianapolis at 10:30 p.m., making only one stop. I enjoyed riding through Pennsylvania and West Virginia. Those states are beautiful, and I will stop on the way back home Monday to take some pics. The scenery is absolutely gorgeous, need some pics to look at for serenity purposes. Ha Ha!! Especially when I go back to the ole day job Wednesday!  : (

Well, I got to see the guys practice today, and it was pretty awesome. There are eighteen riders, and ten different teams. Valentino Rossi, Jorge Lorenzo are my favorite drivers on the Fiat Yamaha team. They are two of the top riders. Then, there is Dani Pedrosa of Repsol Honda. My favorites on the Marlboro Ducati team are Casey Stoner and Nicky Hayden. These are the top three teams, since the riders have won all the races in the past couple of years. There are other teams, but so far they aren't strong enough to compete with the three teams listed above.

Also, I checked out some awesome Harley's! I love my Harley's, but saw two Ducatis I wouldn't mind having! Harley's are made for cruisin, Ducatis are made for sportin! LOL As a teen, I thought about riding motorcycles, just never did. 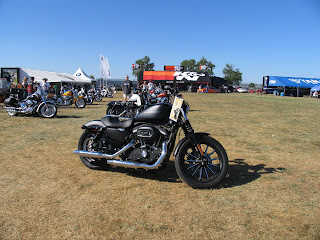 The Harley above is an Iron 883, out of all the ones I saw, this stood out to me the most. Sorry, the pics aren't cropped, I only cropped the ones for my Facebook page.

Seriously, thinking about taking a motorcycle class and getting my license. The only thing is, I'd have to start out light, according to my boyfriend, so that means the Harley Sportster 883 would be suitable for me. I love Harleys in all black, black and silver, or black and gold. Red is awesome on a Ducati, but then again, so is black!!

Here in Indianapolis bikes are everywhere, and people are so much more laid back than in Maryland. I would ride a cycle around here, but not in MD, unless I were to go on the back roads. Rush hour traffic in Indianapolis is way less than an hour, certainly not used to that.

Well folks, just a short post, will upload pics tomorrow. Now, going to shower & rest up a bit before heading out to dinner!


Ciao
Posted by Unknown at 4:43 PM No comments:

Hey there. My free read, Vampire's Plaything is now available on http://interracialerotica.net. I've added a few extra paragraphs, and it is totally different from the version on my website. So, do forget, drop by and leave me a line. Also, rate my story. Let me know what you think please!

Ciao
Posted by Unknown at 6:19 PM No comments:

Thanks ladies for participating!

Hello everyone, totally charged about this story because it evolved from 1,000 words to over 30,000 words. This was once a free read on the Long and Short Reviews/WC site. I wrote this story specifically for a free read, and something told me I should have chosen something else, but I didn't listen.
You see, LASR/WC requires their free reads to be 1,000. My story was about 1,500 words. Also, I would have had to submit five more times to get the entire story in front of readers. So, Marianne, Judy, and myself decided that it would be best for them to return my rights to me so I could expand upon it. Don't get me wrong, the reader panel loved the short version of this story, but there was just simply too much to tell in 1,000 words. I'm also very happy that the ladies have asked me to keep them posted about this novella.
Anyway, I'm holding a contest for this story too. The prizes will be a free copy of Spiritwalker, a trinket from Silpada, sterling silver jewelry, and a bath and body work product from Mary Kay.
Simply respond to this post and your name will be entered in The Random Picker. I'm sure I'll offer a consultation prize as well because everyone has been fabulous and supportive. I appreciate the emails from readers, and authors alike. Thank you all! Don't worry, I do plan to hold more contests in the future, too!  ; )
Now, I hope you enjoy the blurb and excerpt:
* * *
Blurb:
Things can’t get much better for Vivian Patterson at the ripe old age of thirty-eight. She’s got an excellent job, looks that kill, and a smokin’ hot bod. Oh, she also has a loving, faithful boyfriend who sends her blood pressure skyrocketing through the roof. She couldn’t ask for anything more, right?
Magnus Abernethy, Vivian’s boyfriend is all any woman could ever want in a man. He is handsome as hell, has an adorable personality, and willing to go that extra mile to please his woman. Magnus is the total package. There is just one problem with this relationship. Magnus is a spirit, trapped within another realm…. This situation was never a problem for Vivian, but she discovers as time moves on, she craves him to be flesh and blood, forever, not just for an entire evening. Can Vivian and Magnus overcome a witch’s cruel curse, and carry on through life, the way it was intended, or will the menacing dark force from their past threaten any happiness that may be in the stars for them?

Looking forward to chatting with you all!

Hello and Happy Friday to you! I'm eager to share an anthology I was invited to participate in by Amira Press. This story will be released in ebook, then will go on to print with all the other Bad Boy Inc stories released by fellow authors. All the book covers are up, so check it out when you receive the opportunity. All the stories look simply awesome, and I can't wait to read them! I will share an excerpt at a later date after my story goes through the editing process. 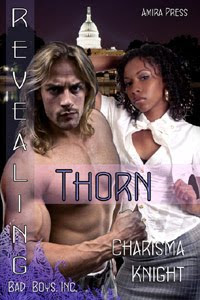 Demon slayer Thorn Magnusson is paid a visit by Wolfe McCoy, leader of Bad Boys Inc, and coerced into accepting an assignment that will clear his record, for good. His mission is to protect sassy witch, Lena Hendrix from Dirik, a descendant of Grendel.

From the moment he laid eyes on her, Lena invoked feelings deep within Thorn he couldn't understand, or ignore.

Their bond strengthens every moment they are together, and eventually he lowers his defenses, while continuing to harbor his dark secret. Who will protect Thorn's heart from the sensual vixen once she discovers his true identity?


Coming Soon to Amira Press
Posted by Unknown at 8:36 AM No comments: